April 24, 2020. It is with great sadness that the Congolese Institute for the Conservation of Nature (ICCN) confirms the identities of the Virunga Park Rangers and employees who tragically lost their lives as a result of the attack that occurred this morning at 11 am on Route Nationale 2 near the headquarters of Virunga National Park in Rumangabo.

All of those that lost their lives leave behind families, colleagues, parents and grieving friends. Three other Rangers are seriously injured and one remains in a critical condition. They have been evacuated to medical facilities where they are receiving appropriate care. In addition to Virunga National Park staff, 4 civilians, not related to the Park, sadly lost their lives and a further 2 were injured.

Initial investigations indicate that the Rangers were on their way back to their headquarters when they encountered a civilian vehicle that had been attacked and subsequently came under a ferociously violent and sustained ambush. We can confirm that the perpetrators of this attack were the armed group “FDLRFOCA.”

These tragic events will not be allowed to undermine Virunga National Park’s commitment to economic and humanitarian development programmes in partnership with, and for the benefit of, the communities that surround the Park. More than ever, those communities aspire to live in a climate of stability, justice and peace.

Our thoughts and prayers are tonight with the families and friends of all the victims, including the innocent civilians, as well as the injured Rangers.

Please help keep this blog alive by following it with your email address. Look for the follow link on the lower right or bottom of your screen. Contact us if you would like to contribute.

In just a few words this morning: If you love Yellowstone and miss hiking the park’s trails then you really need to follow and subscribe to Stan Mill’s YouTube channel. Here is his latest upload, there are over 80 others. Mill’s channel is all about the amazing wildlife in Yellowstone National Park. It includes amazing encounters with grizzly bears, black bears, wolves, cougars and more.

IF you would like to see some of my videos about Yellowstone to help you during the pandemic here are two.

No entry will be allowed into the park, except for employees, residents, and other authorized persons. Through traffic will be prohibited, as will travel on Terlingua Ranch Road within park boundaries. Until further notice.

The National Park Service is modifying its operations on a park-by-park basis in accordance with the latest guidance from the Centers for Disease Control and Prevention (CDC) and state and local public health authorities. While most facilities and events are closed or canceled, many of our outdoor spaces remain accessible to the public. Before visiting, please check with individual parks regarding changes to park operations. If you choose to visit a national park, please ensure that you follow CDC and state and local guidelines to prevent the spread of infectious diseases and practice Leave No Trace principles. Updates about the NPS response, including safety information, are posted on www.nps.gov/coronavirus. 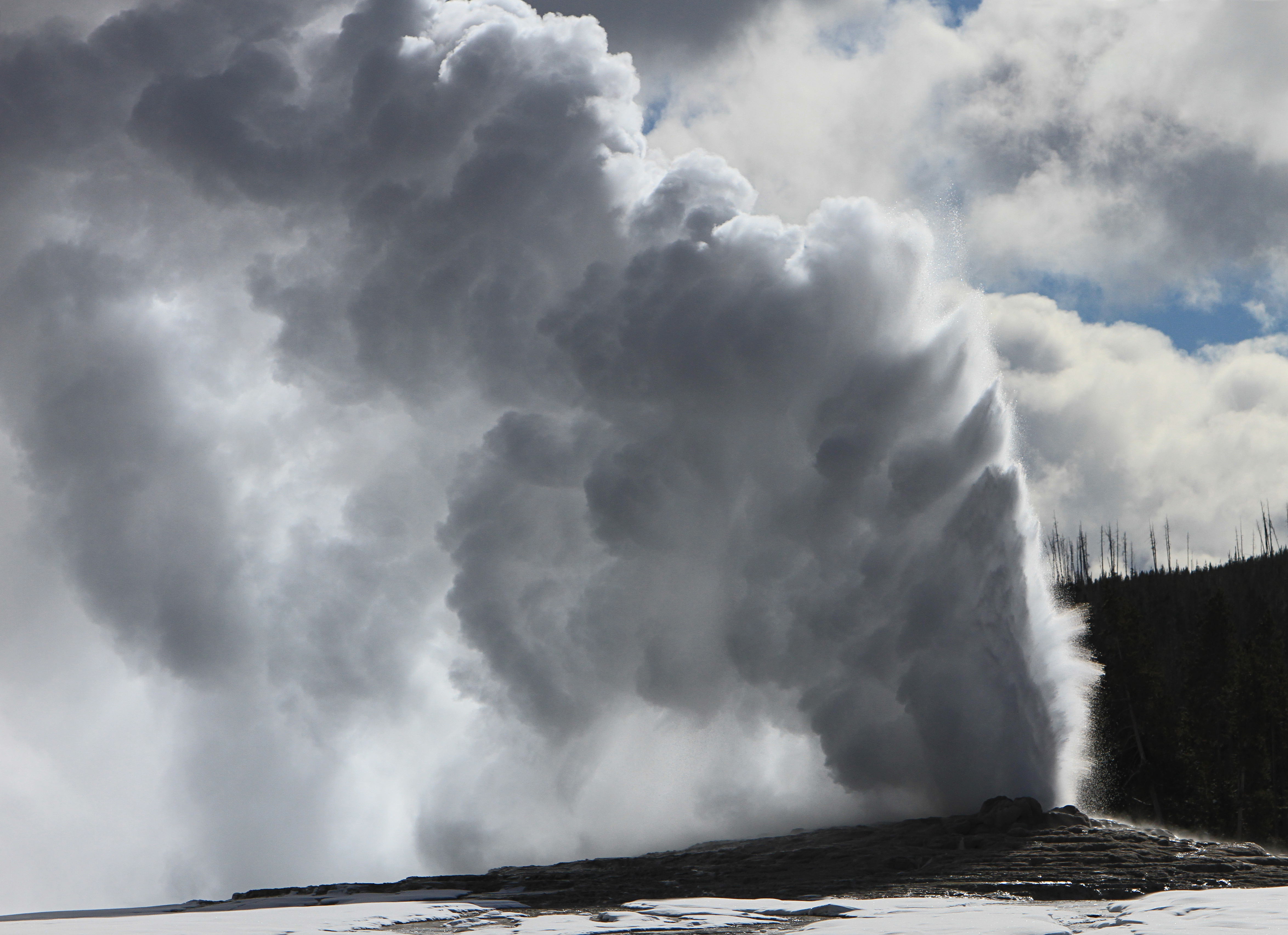 All Yellowstone Images courtesy the National Park Service.  Please follow this blog by entering your email address on the lower right.   I am looking for volunteers to help develop this site.   Have time on your hands?

To help prevent the spread of COVID-19, Yellowstone National Park is closed, but you can still visit the park in a very special way by watching the Old Faithful webcam.

When I worked as a Park Ranger in Yellowstone back in the late 1970’s, one of my most memorable assignments was the year I operated the Old Faithful Visitor Center.  Back in April of 1978 I was the only Park Naturalist on duty at the visitor center.  The Park’s Geologist at the Time was Rick Hutchinson.  Rick and I spent many hours at the VC talking about all the thermal features from the view of the information desk where I would predict the next Old Faithful eruption for the benefit of a handful of park visitors.
There were some days when I counted only ten visitors. Those were the days, almost perfect solitude.

Like the geysers name, it was pretty easy to predict eruptions using a stop watch.   The same formula I used then works pretty much today.  If  Old Faithful has a short eruption,  the next one will be in 60 minutes (plus or minus 10 minutes). If it has a long eruption, it will be 90 minutes (plus or minus 10 minutes) before the next eruption.  Try it when you watch an eruption on the webcam.

The park superintendent was John A. Townsley and he wanted to encourage visitation in the park before the busy summer season.  That same year the park was inscribed by UNESCO on the World Heritage list — the United States’ first World Heritage Site .  Townsley decided to open the road to Old Faithful a few months early.   Lucky me, I was asked to take on the assignment.

At the time I was working as a seasonal Park Naturalist at Big Bend National Park.  When I got the call I loaded up everything I owned in my little Toyota Corolla and headed to Mammoth Park Headquarters to get my keys and learn more about my assignment.

Years later whenever I need my Yellowstone fix and I can’t make it to the park I started  visiting the Old Faithful webcam.  The cam is pointed at the Upper Geyser Basin and Old Faithful.  Different park staff and volunteers move the cam from one spot to the next during the day focusing on making sure it is pointed at Old Faithful during its next eruption.   I only wish there was sound to go with it so just recently I came up with a new way to experience the cam.   I look for YouTube videos of winter snow storms and play the sounds on one windows screen while watching the Old Faithful Cam on another.    It’s not a perfect set up, but it works for me.

The nice thing about the cam is that you never know who might walk by.  If you are really lucky you might see wolves chasing bison or a grizzly bear, but more often there are some pretty amazing sunrises and sunsets.   Now that so many of us are at home, next time you are looking for a new online experience check out this cam.   There are others from different locations in the park, but the Old Faithful cam is the best.

With this blog post I am announcing a new conservation initiative called Operation Virunga 2020.   This operation hopes to organize a group of passionate conservationists who are able and willing to travel to East Africa and meet with non-profit organizations and government and park officials to help save Virunga National Park, one of the most biologically diverse areas on the planet and home to the world’s critically endangered mountain gorillas.

Ever since I completed my guidebook to Volcanoes National Park in Rwanda I have tried to keep up with all the news from Virunga National Park just across the border in the Democratic Republic of the Congo.   What has been most promising is all the news coming out of region on the numbers of critically endangered mountain gorillas and how they are increasing.  Unfortunately, despite all this good news, what is happening in the DRC threatens the mountain gorilla like no other threat to the species.

When I revised my book in 2018, Virunga National Park had closed due to increased violence in the area as a result of increased attacks on park rangers and the abduction of two British tourists. Tourism has resumed, but overall the situation in the park is not  good and to many, it is getting worse by the day.  In 2014 a new threat to Virunga National Park emerged from the British Petroleum Company Soco International. Soco was planning to explore for oil inside the park even though the park is protected by the DRC. According to the World Wildlife Fund oil development in the park would threaten local communities that depend on the park’s natural resources. At Lake Edward for example, more that 27,000 people fish for a living and over 50,000 people depend on the lake for their drinking water. Worldwide opposition with the support of the European Union and the Netflix film Virunga has helped, but in April, 2018 the DRC government was seeking to explore for oil in the park.  Months later the government decided to move forward with plans to drill in the park.

No matter how well the Rwandan and Ugandan governments protects Volcanoes National Park in Rwanda and Mgahinga Gorilla Park and Bwindi Impenetrable Forest National Park in Uganda, what happens in the DRC, where over 5.4 million people were killed during the Congo War of 1998 to 2003, is critical to the conservation of the Virunga ecosystem and the future survival of one our planet’s most magnificent creatures.

No park is an island and there is little doubt that the gorillas and other creatures in the Virungas are threatened by human activities on any side of the border as I discuss in my book, Guide to Rwanda’s Volcanoes National Park, Home to Critically Endangered Mountain Gorillas.  The state of the park at Virunga National Park is hotspot for conservation in this part of the world.   If you are interested in being a part of this group or being a sponsor please contact me and let me know of your interest using the contact form below.

In response to a “We the People” petition that gathered 6,252 signatures supporting the preservation of public lands in northwestern and northeastern portions of the Franklin Mountains, a Preservation and Conservation Plan Committee was established by the Public Service Board (PSB) in late 2015. The purpose of the committee was to establish conservation standards for development and for preservation of PSB managed lands adjacent the mountains and Franklin Mountains State Park.

The committee was made up of a diverse mix of community members and backgrounds, all with the goal of ensuring a high quality of life for present and future generations.  A report was completed and presented to the PSB earlier this year and is now ready for public review.  It contains scientific data to assist in decision making about the existing resources managed by El Paso Water Utilities (EPWU) and in our region by the City of El Paso as well as organizations, government agencies, individuals, developers and business owners. The proposed map included in the report (page 3) identifies lands to be preserved with no disturbances, specific areas to have very limited disturbance, master planned land in the past, and where conservation development may take place. Conservation development is working with the land keeping the terrain, trails water flow, and wildlife corridors in mind.  To read the report in full and provide comments via a survey go to: http://fronteralandalliance.org/conservation/projects/enrich-el-paso-report